Let’s travel to Taiwan’s second largest city after Taipei. As people said, the lesser “undiscover” is more “discover. ” Beneath the cover of a hidden trove to make it the retreat.

Head-off to get into adrenaline rush on the supertall 85 Sky Tower, located in Lingya District of Kaohsiung, considering the architecturally distinct skyscrapers ever established and the second tallest building in Taiwan after Taipei 101, standing at 1240 feet (378m). This highrise iconic building has a prong-shaped design joining two elevated podiums that support a pagoda-inspired tower, which all architecture was creatively drawn by the same architecture who built Taipei 101. Each of the three vertical elements feature a tall central atrium, which simplify the entry of sunlight, and allows better communication between office units and a beautiful sight between city and harbor. Visitors can go up to see the panoramic view of Kaohsiung on the 75th floor by the high-speed elevator, and when it reaches up 120 meters, the inside elevator will turn into a vibrant star, it’s so emotional and romantic. The stunning design of the building leaves a substantial space below the central tower, excellently and usefully generating a spacious area in the building. As it stands on the linguistic terms, the building mimics the shape of the Chinese character “Gao,” which means “Tall” and is the first character of the city’s name. A great space for people who love to live with the creative art. The Pier-2 Art Center situated on the bank of the famous love river in Kaohsiung. Before all of artworks sets the imagination here, this place was originally a port warehouse for storing and keeping fishmeal and sugar. Later in the year 1999, Kaohsiung government stated to rebuilt and transformed it to a famous art area. Eateries, shops, painting galleries and cafes are also hosted there even the music festival that is organized all-year-round. The park is dotted with a large number of cute, avant-garde tall dolls and several man-made art creations. The Pier-2 Art Center is a brilliant place to spend an afternoon because the weather is very windy and cool. There are also lawns strewn with installation art and old railway tracks, where people enjoy picnics and fly kites at sunset; there are rides for children. And no matter what you do in Pier-2, Taiwan’s most gorgeous harbor sights are always within reach. Lastly, do note, most of shops don’t open until at least 1.00 pm. 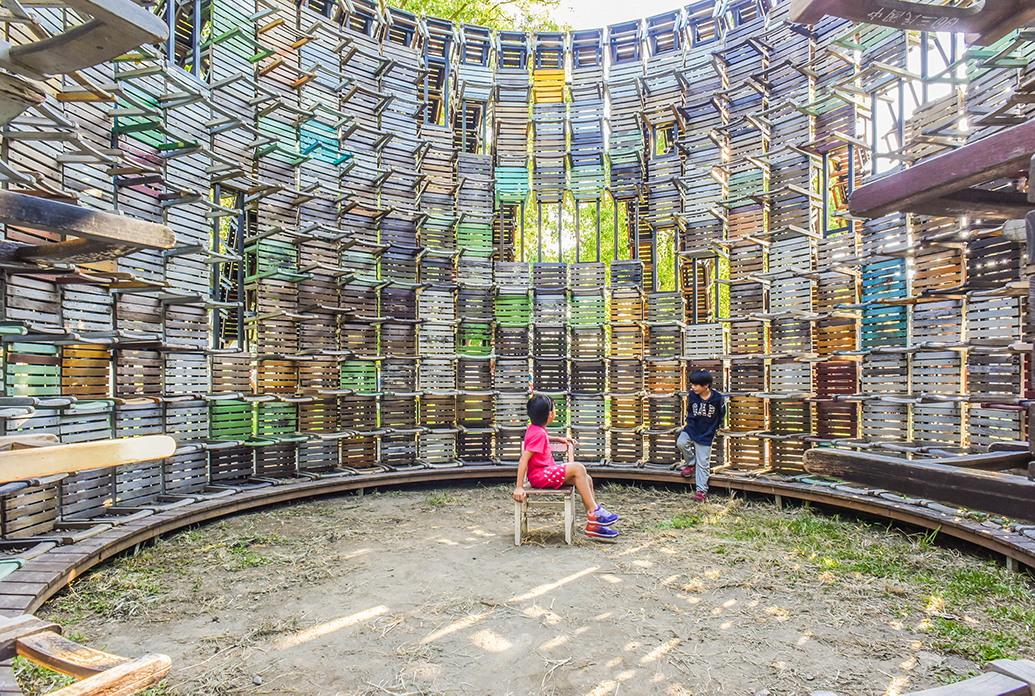 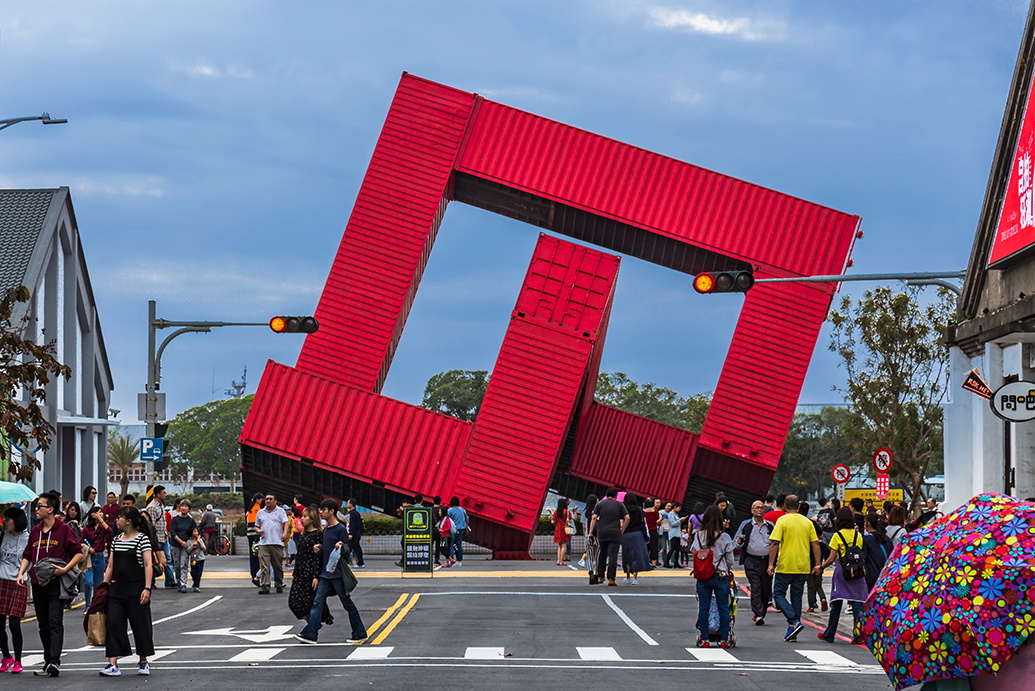 The world’s largest masterpiece of glass art hides in this spectacular Kaohsiung’s busiest subway station. At the intersection of Kaohsiung’s Red and Orange metro lines, the history of the universe plays out on giant dome of illuminated glass. This stunning design was created by famous Italian artist Narcissus Quagliata, and built to commemorate the harrowing birth of Taiwan’s democracy. Dome of Light took time to construct almost four years on the area of 30-meter diameter and shelters an area of 660 square meters. Furthermore, the work was supervised personally by Quagliata and shipped from Germany for installation. The dome quadrants highlight the story of lifecycle of the cosmos, humanity including Taiwan’s own tumultuous political history in four chronologically arranged themes: Water: The Womb of Life; Earth: Prosperity and Growth; Light: The Creative Spirit; and Fire: Destruction and Rebirth, with an overall message mainly echoes with hope of love, tolerance and rebirth. 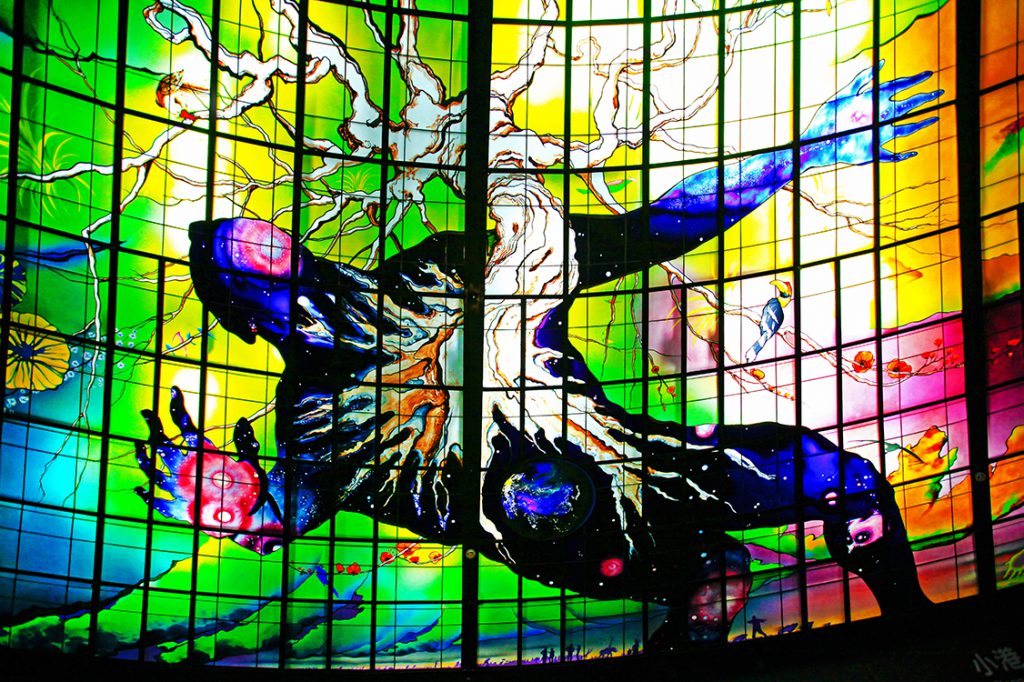 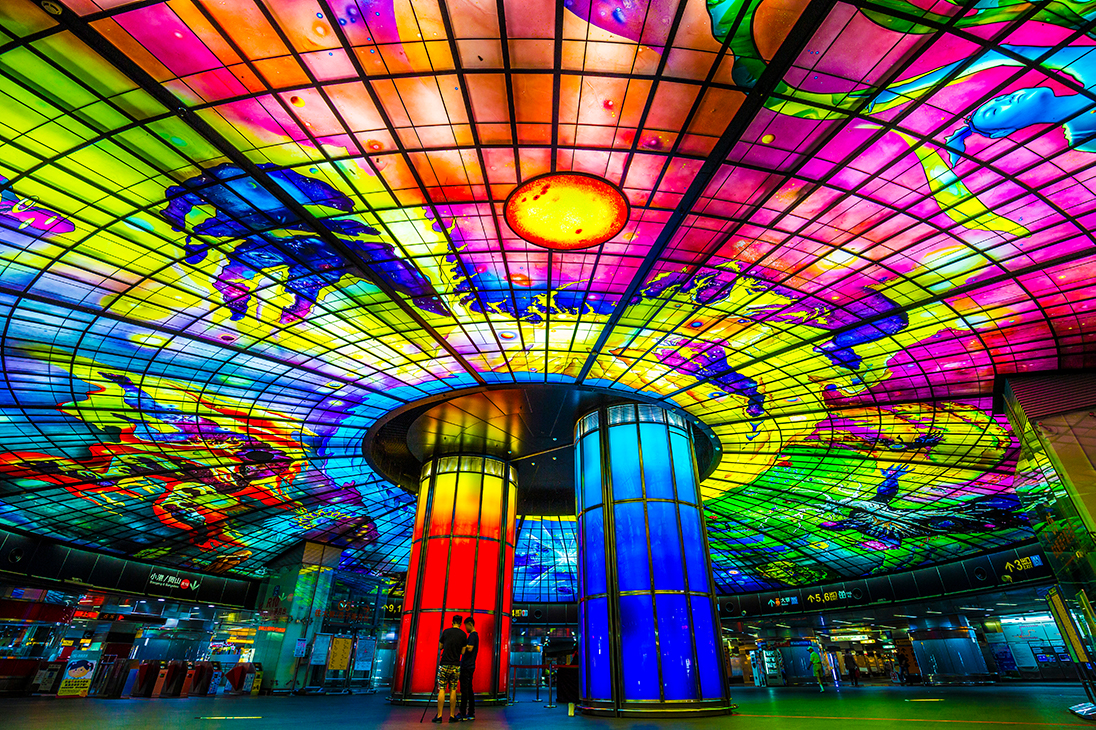 On the southern edge of Lotus Pond, there is the unique two tower temple with the purpose build in the likeness of the eponymous creatures. It’s considered to be among most attractive landmarks of the district. The artificial pond was established in 1951. After that, not too long time, when the calendar approached 1976, the two temples were established too. Two towers were built and separated into seven floors which have yellow walls, red pillars and orange tiles, and the area connected with the lake’s shore by a mazezigzag bridge. As the dragon represents auspicious the great power and strength in the Chinese culture, where they have a control over water, including rain and floods, the dragons are regularly run a character by the emperors of China even one of the 12 zodiac signs. On other hand, the tiger signifies bravery, justice, and harmony, and according to the Chinese tale, it’s the king of creatures, and also part of the zodiac signs. With the great importance and powerful meaning of the dragon and the tiger hold a role in the traditional Kaohsiung culture, allure plenty of visitors who are eager to enter through the dragon’s mouth and come out from the tiger’s mouth, in order to be able to turn bad luck into good, and hope that only good things come to their lifetime. 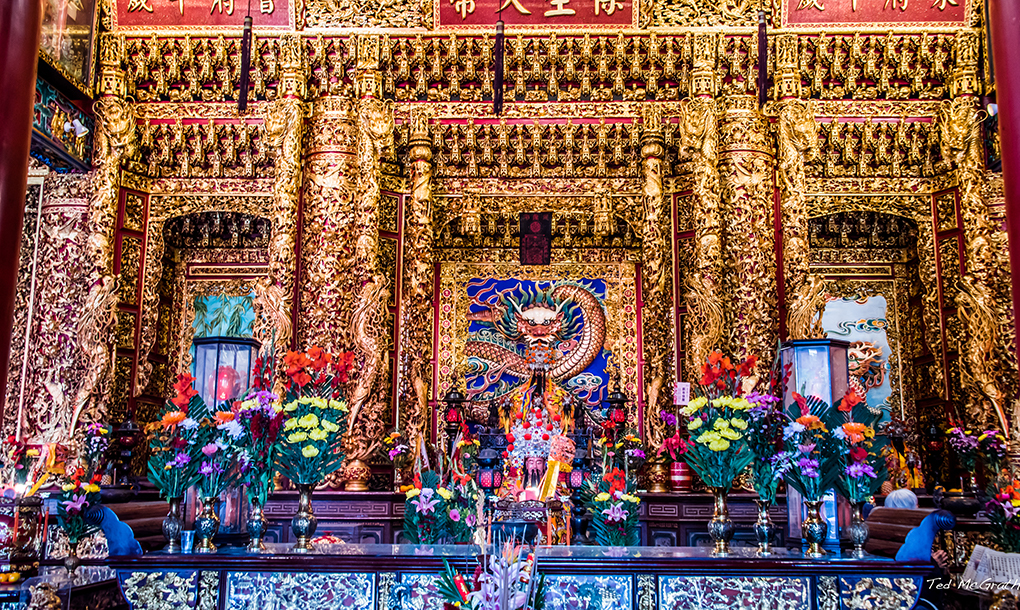 Several travelers may have heard of the mega-churches which are spread out among the bible belt around the globe. When it arises outlandish lavish religious complexes, Fo Guang Shan, located in Taiwan’s Kaohsiung city. The sacred monastery where represents Mahayana Buddhist cultural, religious and educational museum. First eye-catching scene when travelers visit, is a masterpiece creation by humankind, the huge gold Buddha statue (looks like it’s sitting on a pyramid) that built to promote mindfulness of Humanistic Buddhism and make it known for its efforts in the modernization of Chinese Buddhism. Fo Guang Shan Buddha Museum is where people often make a wish. The museum houses one of the tooth relics of Sakyamuni Buddha, the founder of the Buddhist faith. The museum began construction in 2008, and publicly opened in December 2011. Later in 2013, the museum was recognized as the youngest member of the International Council of Museums. Since its opening, the complex continues to incorporate technology into their daily routine, consequently, the museum has frequently been featured in the top 10 landmarks of Taiwan on many famous travel websites. According to a heavy industrial city and the probelm that seems to be more enormously increase at present, therefore Kaohsiung government plans to rebuild the city’s image for making a healthy and highly livable environment for the better life among metropolis. Kaohsiung Central Park is one of part of the city plans to give the fresh air to the city, the park has undergone several transformations with beautiful greeneries and recreational facilities, as well as self-service bike rental machines installed to provide an oasis for the urbanites to enjoy a sense of tranquility and relaxation and intriguing complexes. The library, the labyrinth and the vast lake are the most prominent attractions in this park, attracting joggers, dog-walkers and strolling couples, escape the hectic bustle of city life for an afternoon in this serene park. When the night falls, art works are exhibited as Urban Spotlight or a path. The largest local dining group in Taiwan. Chamonix is a higher-end stylish restaurant inspired by traditional Teppanyaki and French cuisine, offering a large variety of grilled meat and seafood courses. The restaurant brings the guest romantic atmosphere with the modern decoration and relaxed background music. Guest can select to sit on a separate table, or sit directly next to the grill and watch the skilled chefs performs his incredible methods of cooking. The pursuit for each guest will be best delivered the most tasteful flavor, as well as an outstanding experience to senses. 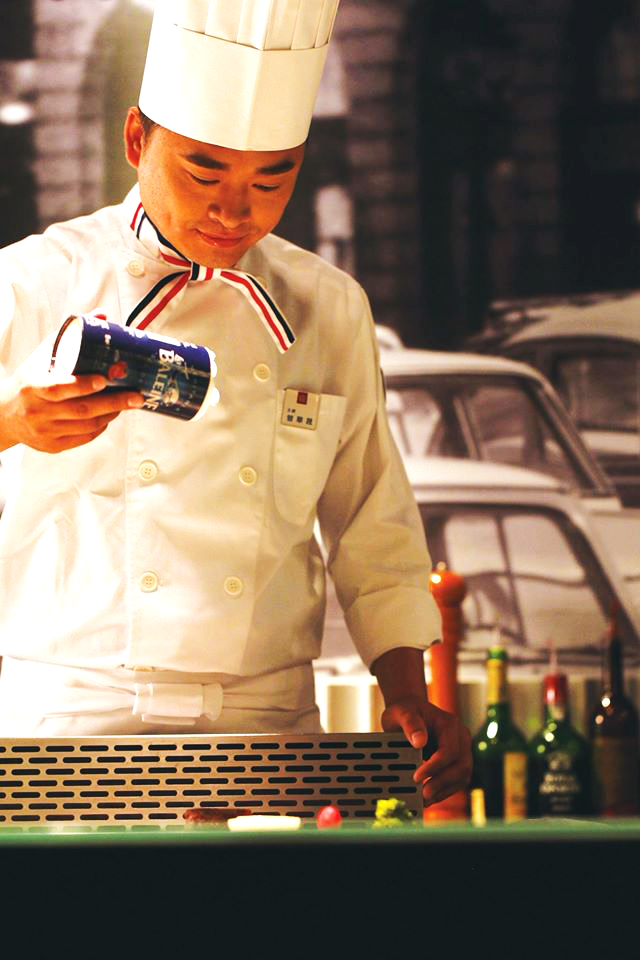 Another Kaohsiung eatery with a welcome relief that serves up a classic sensation of American dish with a twist cuisine. BEAST Bar % Grill prides itself in delivering the highest quality of dishes in a classy setting. A large second floor area and also a cool bar to enjoy a drink, which there is a good selection to choose and satisfy your inner cravings. The atmosphere is super chill, clean, bright and pleasant. The service is great and staff always seem to be smiling to hand everything. Recommend to visit for a lunch. Craft the key to perfect service lies in attention to detail. Din Tai Fung, the oil business that officially became a celebrated international brand and a restaurant in original Xiao Long Bao. First founded in the late 1950 by Yang Bingyi, who immigrated to Taiwan in the midst of the Chinese Civil War. Din Tai Fung boasts hundreds of branches across Asia and Europe with Chinese cuisine, won over the franchise several Michelin stars. Guests often note the freshness of the food and friendliness of the service. Din Tai Fung gives the opportunity to eat at Din Tai Fung anywhere in the world should be seized.