Located in Central Asia, east of Caspian Sea, Turkmenistan is largely covered in the desert with its border connected to Kazakhstan to the north, Uzbekistan to the east, Afghanistan to the south, and Iran to the west. This landlocked country was a part of the Soviet Union, but its historic milestone shines during the age of trade boom between east and west. The silk road brought new ideas and culture to the desert and blended ancient civilizations like Islam, Greek, and Persian. Today, Turkmenistan is an important archaeological site with magical ancient ruins waiting to be explored and even discovered!

The capital of Turkmenistan has the population of a million and sits in the middle of the Karakum Desert by the southern border near Iran. Ashgabat is Persian for “The City of Love” and it is now recognized by the Guinness Book of World Records as having the most white marble-clad buildings in the world. Don’t miss the bright white Presidential Palace, the Independence Square, and the National Museum. Markets are the best place to experience the local way of life. Thus, Altyn Asyr Barzaar is all about learning the everyday life of Turkmens, while shopping is really a cherry on top. The bazaar is located in the heart of the city, offering local ingredients, food, drinks, textiles, and traditional Mari clothes. This is the place to truly see, hear and taste Turkmenistan. The Ruhy Mosque isn’t just the national mosque of Turkmenistan, but it’s also the largest mosque in Central Asia. Built by Saparmurat Niyazov, the first president of Turkmenistan in 2002 – 2004 as the symbol of independence (1991), the mosque covers 85 acres of land just outside Ashgabat, near Gypjak, the hometown of Niyazov. Ruhy Mosque features a beautiful golden dome and tall white towers. The interior is cladded with white Italian marble and an impossibly huge handmade carpet, which hosts up to 10,000 people at a time. 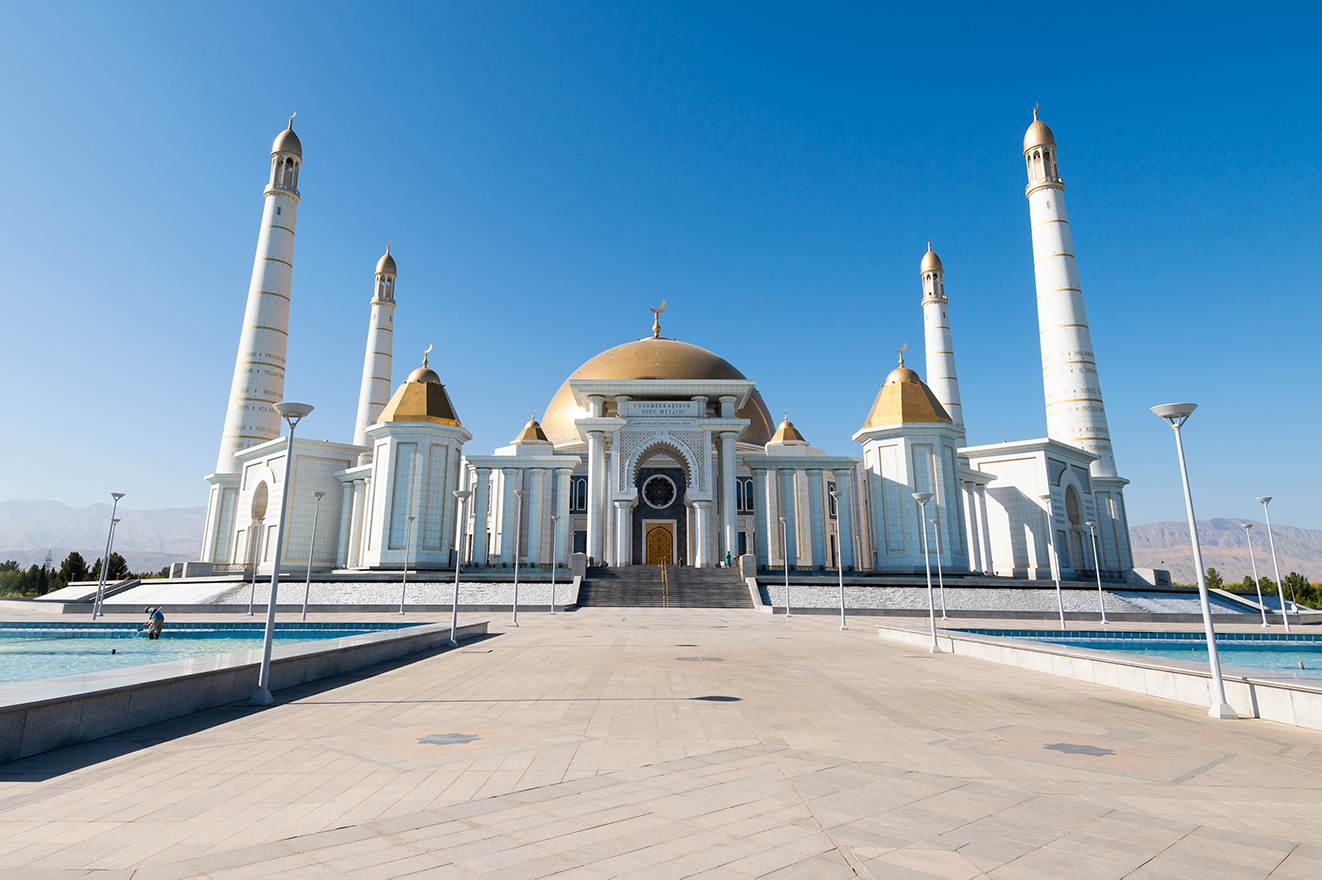 As UNESCO’s World Heritage site, Nisa was the center of trade and commerce for the Parthian Empire, a powerful Central Asia empire from 247 BC to 224 AD. King Arsaces the First established Nisa, which was renamed to Mithradatkirt by King Mithridates the First, but the city was destroyed by a devasting earthquake in 10 BC. Later restored as a strategic fortress to prevent the Roman invasion into Asia, Nisa is a formidable fortress with almost 10 meters thick wall and 43 towers. Mosques and palaces were built within these seemingly impenetrable walls, as well as a vault that held valuable treasures and wine. 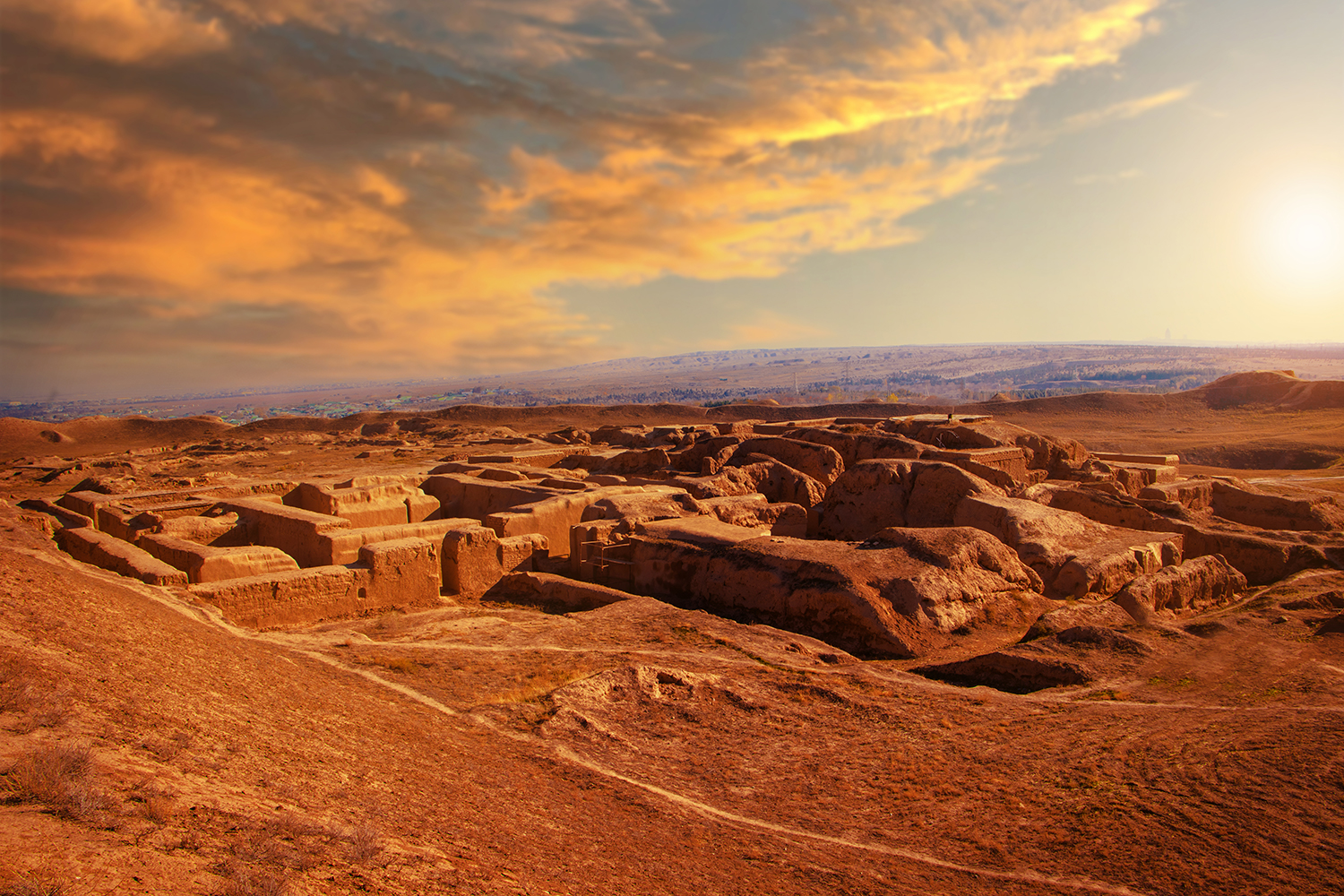 One of Turkmenistan’s highlights is Darvaza Gas Crater. Found in the middle of the Karakum Desert, 260 km north of Ashgabat, the crater is known locally as the “Door to hell”. The name rightfully describes the red hot crater that has been continuously burning for over 40 years. The burning crater began in 1971 when an oil survey found a gas pocket before everything went downhill. The site collapsed, with all rigs and equipment, into a 70 meters wide and 30 meters deep hole. With concerns for poisonous gas escaping the site, a Soviet geologist set the gas cavern on fire and it has been burning ever since. Darvaza is now a tourist landmark alongside Darvaza Water Crater, an emerald water crater with gas bubbles shooting out continuously. 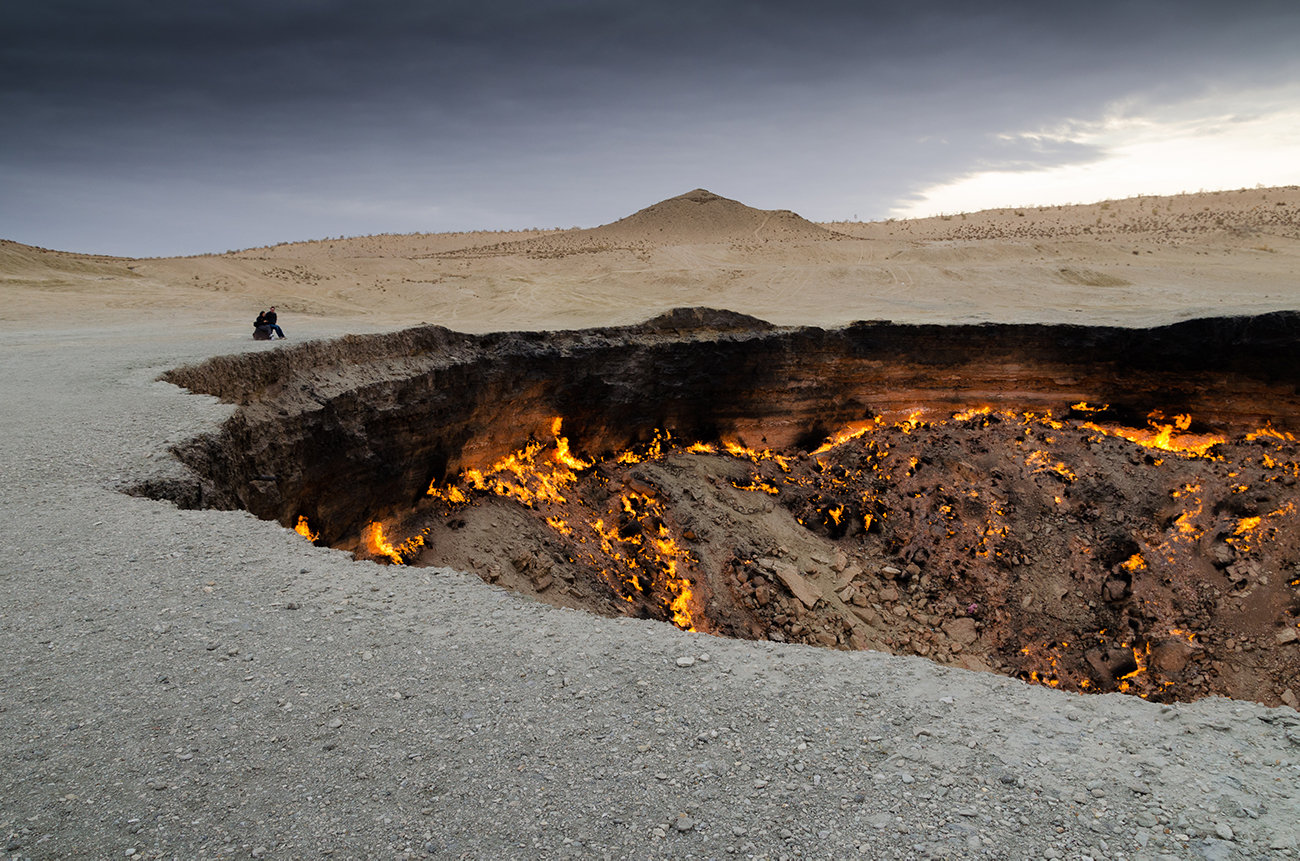 Dubbed as the “Grand Canyon of Turkmenistan”, Yangykala Canyon literally means Fire Fortress. Shaped under the Tethys Sea for 5.5 million years, the vibrant limestone canyon was slowly eroded by wind and rain after the ocean dried out. The erosion cut out 60 – 100 meters tall cliffs and canyons whose walls are now ribbed like the carcasses of strange, stranded sea creatures. Yangykala Canyon’s distinct look highlights a spectrum of coral shades, including pinks, oranges, reds and yellows, and stretches 25 km to Kara Bogaz Basin, next to the Caspian Sea. 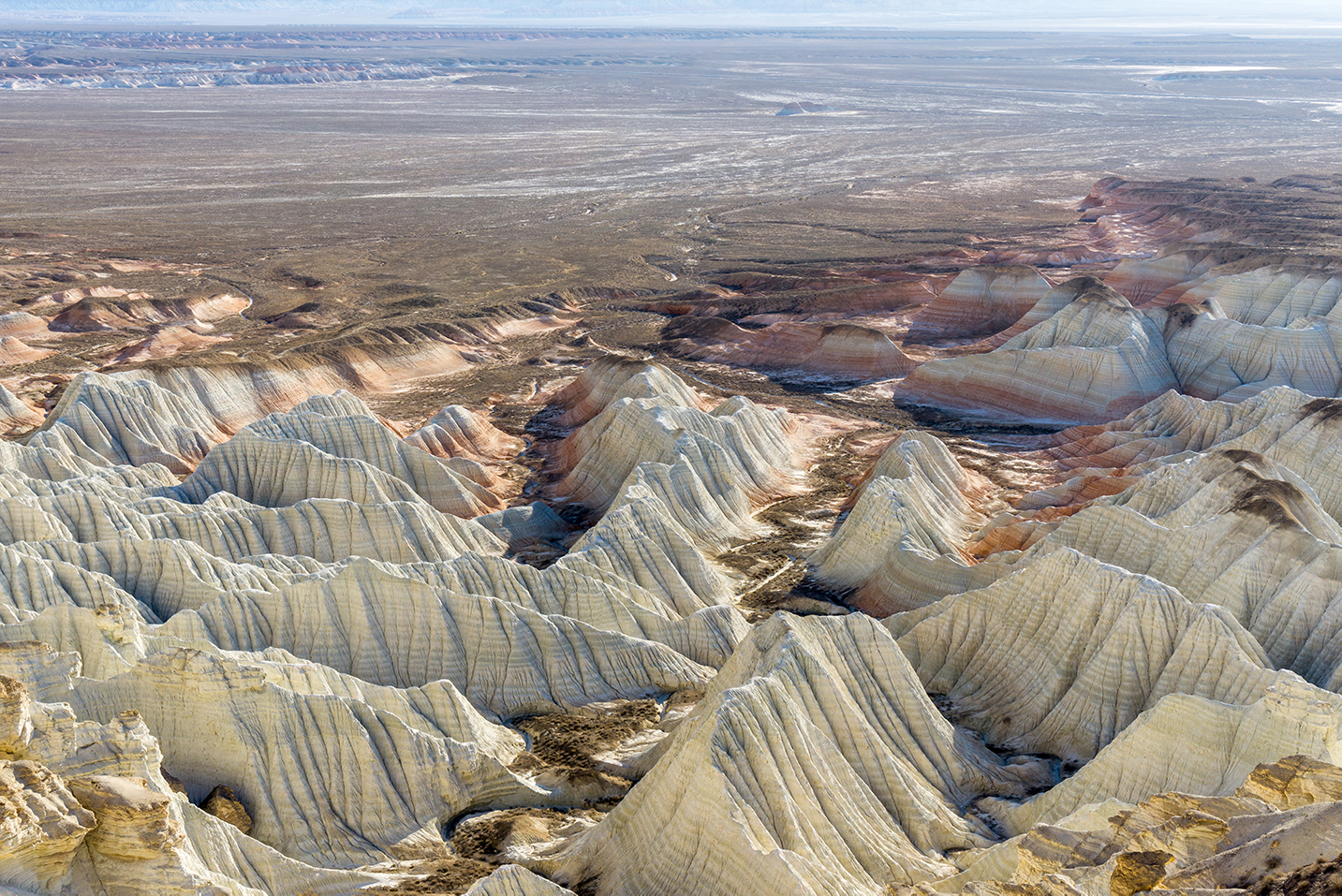 The ancient city of Mary was once the capital of Maru people. The city dates back to 7 – 9 AD as an important commercial and religious centers before the Mongols overran the city in 1221. The Soviet Union occupied the region in 1884 and Turkmenistan became independent in 1991.

The block architecture of Mary National History and Ethnology Museum stands out in the city of Mary. The museum exhibits historical and cultural valuables like tapestries, drawings, ceramics and sculptures, ancient traditional clothes, Turkmen carpets and jewellery, as well as ancient artefacts and manuscripts. The Great Kyz Kala is the most completed historic site out of the 5 ancient Merv sites. Great Kyz Kala, along with its pair, Little Kyz Kala, are some of the most symbolic and important structures in western Merv archaeology. This crumbling 7th-century fortress outside the walls of Merv is interesting for its ‘petrified stockade’ walls, and if you love the history of Macedonia, you shouldn’t miss this ancient fortress. Turkmenistan has a long history of ancient cities, and Kunya Urgench is another important world heritage site and the capital of the Khorezm region. The ancient town features a series of monuments built in the 11th to 16th centuries like the gates of a caravanserai, fortresses, mausoleums and a 60-meter high minaret, which reflect the architecture and craftsmanship that influenced its neighbours, including Iran, Afghanistan, and later the Mogul Empire of 16th century India. 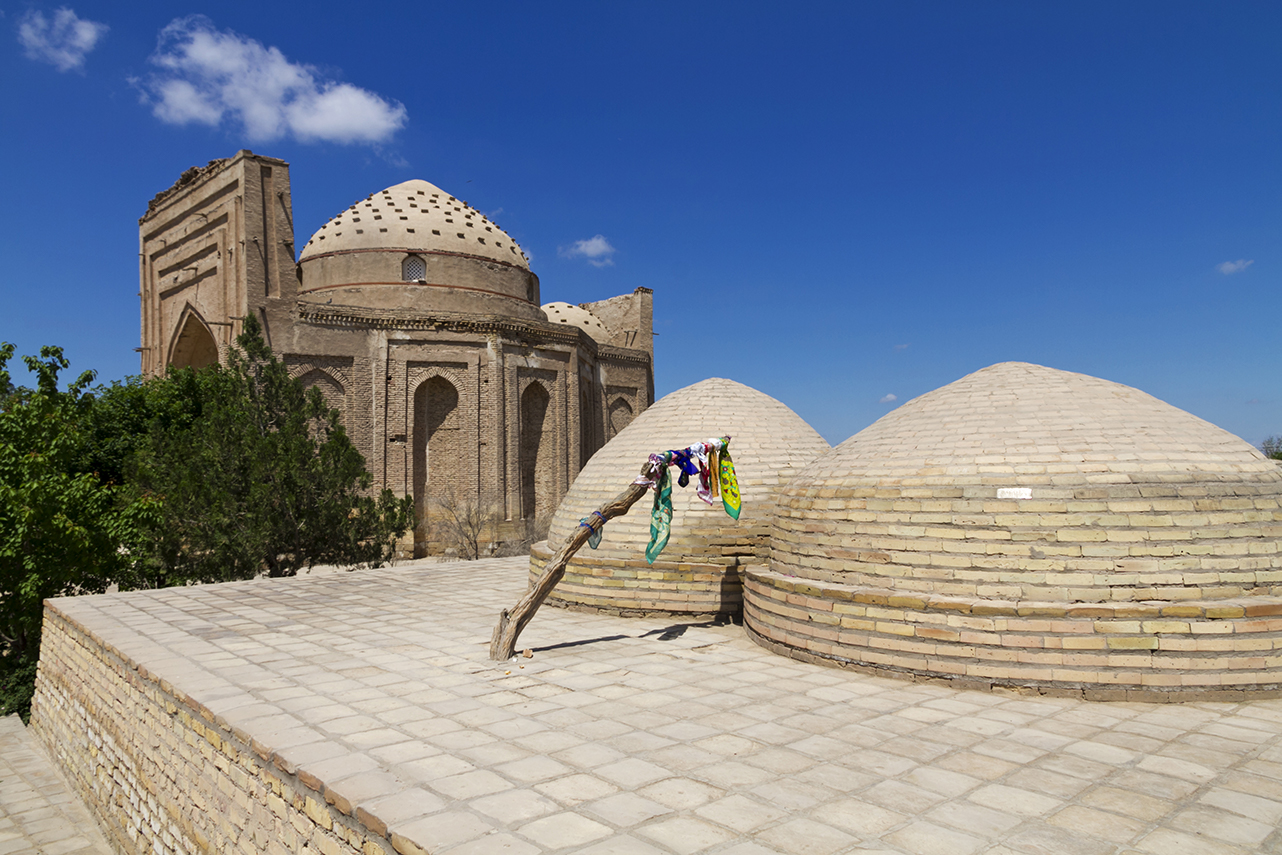