New luxury resort to open in Krabi this October

Embraced on two sides by one of Thailand’s most alluring national parks, and on its seaside by yet another marine national park, the Banyan Tree Krabi is transitioning from the dream like-state of design to a reality.

A 45-minute taxi ride from Krabi International Airport, Banyan Tree will be just the sixth hotel to open at Tubkaek Beach, which is some 20 km along the coastline from the more popular Ao Nang and Railey beaches for which Krabi is better known.

While many resorts can trumpet an oceanfront perch on azure waters, it’s not every new resort that commands a vista of limestone towers scattered across the sea like chess pieces on a clear jade table. Or cable car access to a restaurant perched high on a hill on the edge of Tubkaek National Park.

Three years in the making, Banyan Tree Krabi is heading down the homestretch of a development journey that will position the property as a springboard to some of the most awesome natural spectacles in Thailand.

But unlike Koh Phi Phi and Phuket, trodden by the footprints of many a tourist over the years, this tranquil natural wonder is far from the beaten track. Only one island, Koh Hong, permits boats to anchor and scout its short strip of white sand and twisting nature trail. Koh Hong is surely one of creation’s masterpieces – once a hideaway for pirates, the island is imploded in the center like a volcano, providing a pristine pool of calm sapphire water surrounded by mangroves and towering karst walls draped with vines. This blue lagoon can be navigated through a narrow cleft in the clifface, allowing visitors on longtail boats and kayaks a chance to wallow in what must surely be a mariner’s Garden of Eden.

In an age when international visitors are seeking more remote and natural settings when coming to Thailand, this intimate 72-key resort, which is due to open in the fourth quarter of 2020, is creating an effortless bridge between luxury resort and a pristine, untouched environment.

The 10-acre property is surrounded by national parks on three sides: the rolling green mountains of a conserved forest serve as a backdrop to the north and east, while the jutting limestone peaks command a hypnotic view to the west.

From sea, the rollercoasting mountain range is said to resemble a slithering dragon, or naga, a mythical Hindu and Buddhist serpent popular in many ancient epics. Sitting immediately above Banyan Tree Krabi sits Naga Crest Hill, a short walk suitable for all the family, where you can take in the setting sun.

Banyan Tree Krabi has adopted the naga as its symbol, and it is prevalent throughout the resort from the names of amenities to the wavy serpentine patterns in the villas.

A natural spring flows from one of those naga crests and winds its way downhill into the resort where Banyan Tree’s innovative design team, Architrave, has sculpted what promises to be a beautiful floral canal to ferry the springwater into the sea. The “island” that is created between the canal and the shore is home to most of Banyan Tree’s facilities – the restaurants, kids’ club, spa, wedding deck, conference room, and the beach bar, all of which face west and take in magnificent sunsets.

Commanding a dramatic vista of the beach and the karst marine park is the all-seeing eye of Saffron Restaurant. Guests will have the choice of a small cable car to escort them to what promises to be one of Krabi’s premier evening dining venues. With seating for 70 guests both indoors and out, Saffron is accompanied by three “Bird’s Nests” – private tables perched precariously among the trees, offering diners not only intimacy, but that magical Instagram moment to make all their friends at home green with envy. 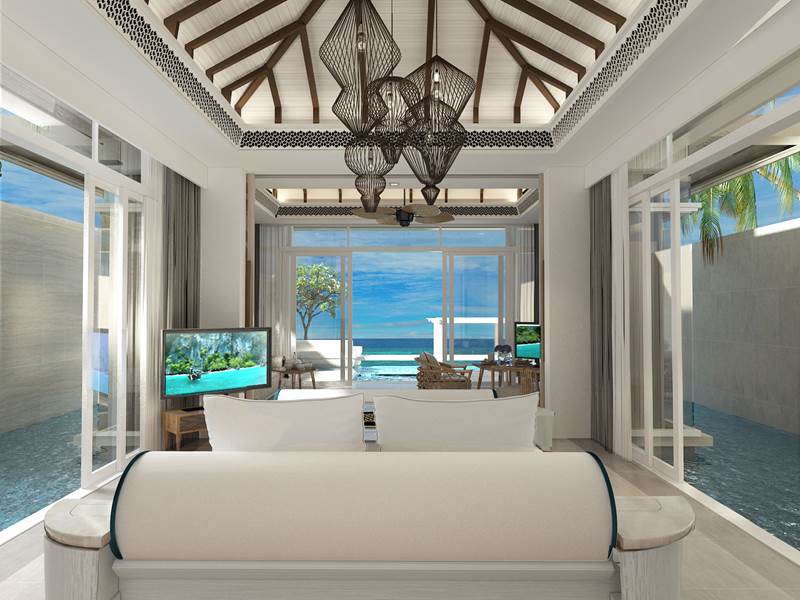 The resort’s all-day dining destination will be called Naga Kitchen, catering breakfasts, lunches and dinner with a plethora of international choices. Executive Chef Jakkrit Traibun, who was the sous-chef at Banyan Tree Samui for seven years, is a southern Thai and specializes in the aromatic and spicy flavors of that culinary style.

Always popular at Banyan Tree is in-room dining. With romance and relaxation, a key ingredient for so many customers, room service includes such novelties as a floating breakfast, a floating sunset tapas set or a private barbecue prepared by your very own chef.

Which brings us to the suites & villas themselves: 72 units, each facing westward towards the sea, with those on higher tiers commanding greater vistas. Perhaps the most impressive feature is the private plunge pool which fronts each and every room, accompanied by a jet pool. Ten beachfront villas sport wrap-around pools on three sides, perhaps giving guests the impression that they are floating on an island. Villas are modern and bright; decor is contemporary chic with gentle tones of wood, stone and sand that are ever so easy on the eye. Guests can expect all mod cons including high-speed Internet and a full range of multilingual channels on state-of-the-art flat screen TVs.

The designers have implemented ceiling-to-floor glass doors in the rooms, allowing maximum natural light. But coolness can be assured with air-conditioning, ceiling fans and the cool underfoot of veined white marble tiling. Indeed, during the day the polished hardwood ceilings and decor take on a warm orange-beige hue, while in the evenings the interior appears to swim in a cool blue stone-colored air. This is not accidental – the designers have cleverly installed adjustable lighting to emphasize this very phenomenon – “mood” lighting when dimmed, and “ambient” light when bright. The overall effect of spaciousness is accentuated by reflections of water from the pools.

Water is another recurring theme at Banyan Tree Krabi, and guests will constantly find themselves listening to nothing but the sweet tune of gentle waterfalls or fountains.

The centerpiece of the resort, and one of the first things guests will see as they walk through the Buddhist temple-like entrance, is a sublime waterfall cascading through a circular sinkhole into a running stream below. With a backdrop of emerald sea and karsts, it is an awe-inspiring spectacle to arrive upon, and is sure to become one of the resort’s most photographed moments.

Underneath the sinkhole in the open-air lobby is a serene spot known provisionally as “The Grotto” where the stream is flanked by greenery and flora as it trickles over rock gardens into small ponds.

Crossing over a quaint wooden bridge from the villas back to “The Island”, we find the Kids’ Club, which is centered around a small waterpark with a serpentine slider and shallow saltwater pools. Fully supervised while mum and dad enjoy some alone time, the play area also includes a zipline, a rope bridge, a naga-themed cave and a climbing wall. No TVs and videos here! No sir – healthy outdoors activities and fun for all is the cry, while at the same time separating the toddlers’ pool and facilities from the teenagers’ more boisterous pursuits.

Of course, Banyan Tree is renowned as a spa resort and has an avalanche of awards to mirror this. In Krabi, the spa will build upon that reputation by maintaining its sense of Thai-ness and the much-acclaimed Rainforest hydrotherapy facility, while promoting some local treatments and ingredients such as coconut potions and a heated lava shell massage.

The signature Rainforest treatment is a must-do while at Banyan Tree – an Amazonesque journey through vitality pools, a steam room and sauna, an ice fountain, and rejuvenating water jets. Aside from that unique experience, guests can always opt for traditional Thai massage and beauty therapies. Eight treatment rooms will be available in the spa’s 170 sqm pavilion, which includes two outdoors pools – one hot, one cold – set to backgrounds of cascading waterfalls.

So, with couples snuggling up in love nests, dads sipping martinis at the beach bar, mums luxuriating in the spa, and the kids frolicking in the waterpark, it may be tempting to say that all boxes have been ticked. However, Banyan Tree Krabi has an additional target in its sights this time round – the MICE segment. A 176-sqm boardroom with conference facilities and a banquet hall are being built to cater for the emerging market of MICE and business meeting organizers who seek a secluded retreat for their delegates and staff, one which combines all the technology and comfort of the modern era with nature activities and tranquility.

“We feel we have all the magical elements at Banyan Tree Krabi that a discerning and well-travelled visitor is looking for,” said Banyan Tree Cluster General Manager Remko Krosen. “We aim to cater to weddings and honeymoons, multigenerational families and couples seeking relaxation, and even the combination of nature-lovers and business conferences.

“Our owners have held onto this piece of land since 2006, waiting for the right time to open this resort,” he added. “Now, with so many areas in Phuket and Koh Phi Phi perceived as overcrowded and undoubtedly impacted from an environmental point of view, the time is right to make this stunning resort at Tubkaek Beach a reality.”

Banyan Tree Krabi is due to open its doors to guests in the fourth quarter of 2020. For reservations and inquiries, go to: https://www.banyantree.com/booking 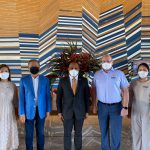 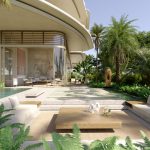