Of all the countries of Sub-Saharan Africa, Namibia is arguably the most comprehensively touristfriendly. Home to proud tribes steeped in tradition, herds of rare desert-dwelling elephants,wild horses and massive colonies of seals, Namibia showcases the very best of Africa’s raw landscapes. From quaint German-inspired towns to uninhabitable deserts, bushland filled with wildlife and a rocky coastline littered with shipwrecks, Namibia’s untamed charm is compelling, captivating and cameraworthy 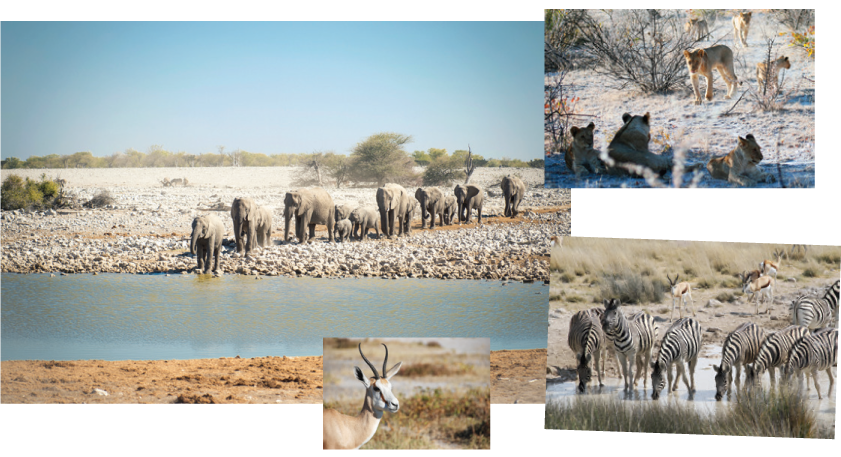 Etosha National Park is unique in Africa.The park’s main characteristic is a salt pan so large it can be seen from space. Yet there is abundant wildlife that congregates around the waterholes, giving you almost guaranteed game sightings. At the same time Etosha National Park is one of the most accessible game reserves in Namibia and Southern Africa. The large mammals in Etosha National Park include lion, leopard, elephant, rhino, giraffe, wildebeest, cheetah, hyena, mountain and plains zebra, springbok, kudu, gemsbok and eland. Among the smaller species you will find jackal, bat-eared fox, warthog, honey badger and ground squirrel. During the dry season, the numerous waterholes scattered around the park are the best place to see animals but during the rainy season they disperse all over the park to temporary water sources and to feast on the abundant vegetation which pops up after the rains.

PLANNING YOUR TRIP THROUGH ETOSHA

Etosha National Park has 6 camps which are available to the public. The most famous and oldest camps are Okaukuejo in the South (Andersson’s Gate), Halali (which is situated between Okaukeujo and Namutoni), Namutoni and Onkoshi which are located on the North Eastern side of the park (Von Lindguist Gate). In the Western part of the park you have Dolomite camp and the newest camp Olifantsrus, which only has camping facilities. Planning your trip can be challenging at times, especially for those who are visiting the park for the first time 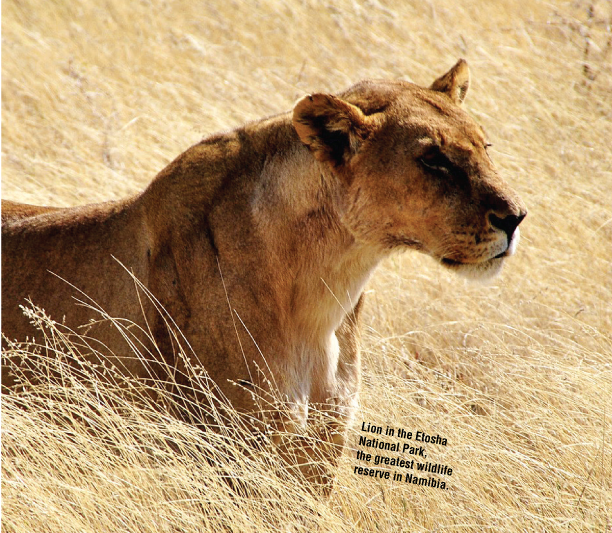 Lion in the Etosha National Park

Situated in the largest conservation area in Africa (the Namib-Naukluft National Park), Sossusvlei is possibly Namibia’s most spectacular and best-known attraction. Characterised by the large red dunes that surround it, Sossusvlei is a large, white, salt and clay pan and is a great destination all year round. The dunes in this area are some of the highest in the world, reaching almost 400 meters, and provide photographic enthusiasts with wonderful images in the beautiful morning and evening light. Here are the Top 3 placesyou should visit during your Sossusvlei trip

Dune 45 is the most popular viewpoint for tourists in the area and its fascinating shape and accessibility makes it the most photographed dune in the world. It is situated 45km from the gate, hence its name, and is easily reached using a 2×4 vehicle. Visitors are allowed to climb Dune 45, so be sure to visit early in the morning to watch the sunrise over the vlei from the top of the Dune. The Dune is 85 meters high and the incredible panoramic view of Dune Valley from the top is well worth the climb. In the morning and evening light the floor of the pan is truly a sight to behold.

Big Daddy, as the name implies, is the tallest dune in the area. At 325 meters tall, this monolithic dune dwarfs the dunes surrounding it. Should you want the ultimate bragging rights, trek to the top of Big Daddy where you can look down onto Deadvlei. Big Daddy is situated between Sossusvlei and Deadvlei.

Not far from Sossusvlei, Deadvlei is well known for its dark, dead camel thorn trees contrasted against the white pan floor. Hundreds of years ago the Tsauchab River flooded the pan and the abundance of water allowed the camel thorn trees to grow. However, the climate changed and the sand dunes encroached on the pan, blocking the river from reaching the area. Estimated to be approximately 900 years old, the dead trees have not decomposed due to the dry climate in the area. Photographers should not miss the opportunity to visit Deadvlei as the contrast between the pitch-black trees and bleached-white pans, and the rustyred dunes and deep blue sky make for incredible images.